I wanted to take a moment to respond to Jesse Benn’s “White Wounding” editorial/blog: http://www.huffingtonpost.com/jesse-benn/towards-a-concept-of-whit_b_7985986.html

Jesse Benn writes for the Huffington Post, which, for those who may be unfamiliar, is a leftist journal/political blog heavily grounded in Critical Theory.  About half of what they do is editorialize, and the other half is news with an editorial slant.  While their editorials are often written as though they are addressing the right, the style of argumentation they use is always the sort which is primarily effective with leftists.

The closest I ever got to being ashamed of myself for being white/European was years ago when I felt shame over how “western” culture was exporting sexual immorality to other cultures.  For example: the lewd movies, the trashy pop music, and the weakening of traditional gender roles and crumbling family model.  But then I realized that this garbage was not western civilization, but a destructive ideology which was introduced artificially for the benefit of certain elites, and promulgated through entertainment, education, and top down subversive legislation.  I never understood the sort of shame and pathological self-hatred the white leftists supposedly feel, and I suspect that much of it is due to Pavlovian style conditioning combined with a weakened awareness of self.

That being said, I will now respond directly to the editorial.

As the article is predicated almost entirely on appeals to emotions, there is not much that requires sound refutation, as the case is only valid among those who share a particular set of emotions.

(This is addressed to white people, from white people. The use of “you”, “us”, “we”, “our”, etc. are used accordingly. It is also written in the context of how race operates in the United States, though the impacts of whiteness are global).

This qualifier seems unnecessary.  The “us” and “we” already imply group membership, and the group is specified through context.  In any case it’s irrelevant, as a sympathy narrative which advocates against someone’s personal interests is going to fail, unless the target audience already hates themselves.

Whiteness was designed to exclude, and to simultaneously offer those of us classified as white certain comforts, privileges, as well as political, economic, and cultural supremacy. Because of this, whiteness harms those it excludes and classifies as others. Importantly, it does so on our behalf.

Typically, in the greater context of history, every people group has constructed their civilization to benefit their own group.  Those who do otherwise tend to perish.  Civilization (or lack thereof) is an outgrowth of culture, and culture is an outgrowth of people groups.  It makes no sense to construct a civilization with social institutions that give preferential treatment to outsiders.  The Chinese never gave any thought to how they could modify their civilization to make it more amenable to the needs and temperaments of Africans, nor did the ancient Hebrews trouble themselves over how they could make Jerusalem a better place for Egyptians and Assyrians.

Any ideology which does not stem from an awareness of self probably leads to dismemberment, and that is where we are headed right now.  For example, the idea that once illegal immigrants step foot on our soil they can stay, that their children can be citizens, and that once they are here we are responsible for their education, medical needs, housing, etc., is absurd, and will lead to our eventual destruction.  It makes more sense to operate from a position of what is better for us, and then if you feel some sort of pity for the 3rd world you can expend your own resources to go there and help them.

Owning up to and acknowledging the inherited benefits of whiteness, and encouraging other white people to do so as well, is an integral aspect of working toward racial justice in white spaces.

Interesting that you said “white spaces,” because you know full well that in non-white countries the civilization is built and organized for the primary benefit of the dominant group.  It’s only white countries that have decided to give special consideration to minorities, and to favor outsiders over the numerically dominant group.  There are race based scholarships, quotas, preferential hiring, and university admissions for everyone except for white people.  No one gets a scholarship, job, or admitted to a university for being white.  Universities and businesses have to obey quotas when it comes to admissions, so a white person might get rejected if the quota for group X has not been achieved, however, if the university or business hires group X beyond the quota, then they will not be made to hire a minimum amount of white people.  In fact, a business could be entirely black or Mexican, and no talks about how they lack diversity and need to hire people from other groups will be taken seriously or acted upon.

Also, you do realize that the average income for Indians and Asians in the US is higher than that of white people?  It appears that in some cases other people are able to make better use of our systems and economy than we are.

Really it shouldn’t matter.  People should be free to hire or dismiss whoever they want without government getting involved, but the country does not operate based on rational thought or logic anymore.

Yet, when confronted with the depth of sins whiteness has and continues to commit to the benefit of all white people, many of us–even those who claim they share in the desire to work toward racial justice–are scared away.

If white people and white countries are so bad, then why are people trying to immigrate to the US in bulk rather than Mexico?  Why do we have to take in thousands of Syrian Muslims when Saudi Arabia exists?  Obviously Mexicans wouldn’t come here if things were objectively worse than Mexico, therefore I see no reason to make special accommodations for these people, especially since I didn’t invite them here.

Put differently, we need philosophers, scholars, engaged citizens, and thoughtful actors imagining the world as it could be–but when the subject at hand is literally a matter of survival for black people and/or People of Color, it’s our belief that the focus of white anti-racists should tilt heavily toward honestly dealing with the injustices in front of us.

It’s not a matter of survival for them.  If blacks don’t like it here they have Africa which is over 90% black, rapidly growing, and likely to stay that way.  The number one killer of black Americans is other black Americans.  That is their own doing.  When it comes to interracial violence, the black on white violence is grossly disproportionate to the reverse, especially in the area of rape.

If Mesoamericans don’t like it here they have most of Central and South America to flee to.  They have much higher birthrates, younger populations, and governments which are committed to maintaining their hegemony.  Actually, there is no race more endangered than white people.

Population of the US: 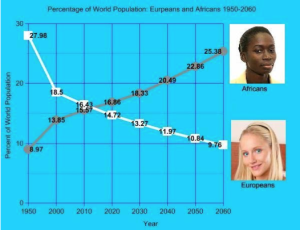 As such, tearing down the system of white supremacy much of the world operates on is a prerequisite to forming any meaningful healthy version of whiteness. 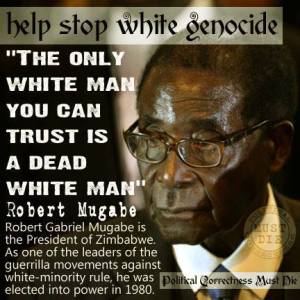 You might be able to argue for white supremacy in Russia, but certainly not most of the world.  And it’s interesting how the pro-gay multicultural leftists will argue about white supremacy as if there were going to be a second coming of Hitler, while remaining completely mum over the depredations of Islam.

The primary question for white anti-racists then, should ask how we can accelerate the break up of white supremacy, rather than what type of whiteness should come next–or if we can rid ourselves of whiteness altogether.

Surely, at this point, some readers might be wondering what good this tactic would do. Won’t it just scare off “good” white people? Won’t white people refuse to engage in this work if it’s painful?

But working toward racial justice cannot be about white people feeling better about our whiteness. If anything it should be about the opposite. And no, this doesn’t mean you shouldn’t be proud of who you are, or your heritage/ethnicity–but these are not the same as your whiteness.

I won’t be joining your cause because it does not appear to be in my interest.  I’m more concerned with preserving the civilization, standard of living, and way of life my ancestors built for myself, my kid(s), and my descendants.  I have no objective reason for preferring other people over my kids, or putting the welfare of others (especially immigrants) over the well-being of myself and my family.

Foreigners should receive no special accommodations, and there is no objective reason for why our civilization should be rewritten to their benefit.  They can always leave.  The US is not a gulag (yet), and no one is being forced to stay here.  If people were being brought here against their will and forced into labor camps there might be some legitimacy to what you are saying, but that is not the case.